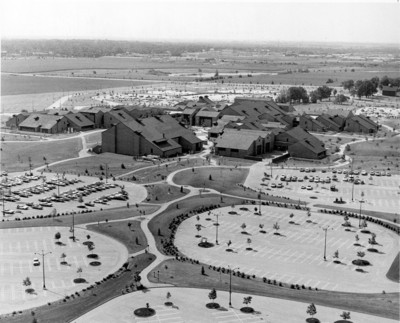 Aerial photograph of Parkland from the Northwest. Phase I, The B, C, L, and M wings, and Phase II, the X wing, were joined by Phase III, the gym (front, center), ca 1976. Although ground was broken for the gym in 1974, construction was delayed by a labor strike. The Theatre and Planetarium would be added by October 1987. The Dodds Athletic Complex (2012) and the Fine and Applied Art addition (2014) would also later change the campus profile.